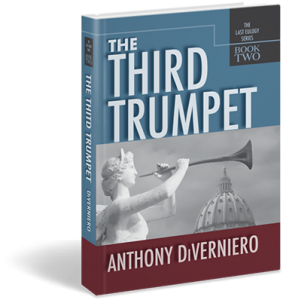 In this political thriller, Mother Nature has unleashed a fury that knows no bounds.

Governments around the globe are entrenched in chaos as fundamentalist and homegrown factions plot revolution. The European Union is becoming an economic superpower without a conscience. Hidden agendas threaten to destroy the Constitution itself. A presidential election looms as discontented Americans call out for change. Congress teeters on the precipice of anarchy.

Retired Colonel Giacomo DeLaurentis is forced back into service when a murder attempt puts his political activist sister in a coma. Letters and a stolen journal from his deceased father—the “messenger from God”—are brought to light, connecting family events to the peril of the planet.

As all hell (quite literally) breaks loose, Giacomo has premonitions like his father once did. When his paranormal gift reveals the impending assassination of the President of the United States, he takes action, but first, he must stop those who wish to destroy a prophecy of old and its heirs.

Giacomo’s investigation crosses two continents and four countries as the nexus of the threat emerges—a secret organization with members in the top echelons of every major government and the Vatican. Its goal: world domination.

Snippets from this political thriller

A priest sat at a wooden desk. He read the yellowed scroll, written in AD 34. The Benedictine translated the Hebrew words on the papyrus into Latin: From the ancient village will arise a family from an orphaned child.

He was interrupted by the call for afternoon prayers and would return to his translation the following morning.

Rio DeLaurentis ended the phone conversation with the president of the European Union. She had been in Washington, DC, for four days. As the founder of the three-year-old American Party, she had been subpoenaed by a bipartisan congressional committee. Republicans and Democrats had joined forces to discredit her leadership.

Giacomo’s cell phone rang. He answered to the sound of a whoosh. Fear gripped his body and almost caused him to vomit as he felt the blood drain from his face. Then, silence on the other end of the line.

He read the note in shock—the message spoke of the vice president in derogatory terms that caused him to panic. When they stopped on the corner of Thirty-Ninth Street, a motorcycle squeezed next to the automobile. The rider placed a device on the car’s hood—the clanking sound reverberated through the limo. As they passed through the intersection of First Avenue and Fortieth Street, Tarmac’s limo exploded—obliterated, along with twelve innocent victims.

This political thriller is a must read. It follows book one of the series, Messenger From God.